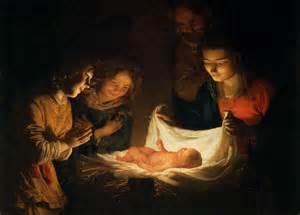 As we in this Advent season anticipate the coming of Jesus (both reliving the anticipation of his birth and looking expectantly towards his return), we greet you after an eventful year.

Peter was ordained as a Catholic priest a year ago, and has had a fulfilling ministry. Roughly February – August he was mostly assigned to a “regular” Roman Catholic parish, St. Cecilia Catholic Community, so he would later be able to supply in a novus ordo parish. Starting in August he became a priest-in-residence at Our Lady of Walsingham, which is the cathedral of the Personal Ordinariate of the Chair of St Peter, i.e. the home church in North America of the Anglican use. The Ordinariate’s Chancery, connected by a cloister to Our Lady of Walsingham, was dedicated on Feb 2, and Peter immediately moved into his office as Director of the House of Study, responsible for facilitating the formation (i.e. theological education) of priests and deacons in the Ordinariate, especially those who were formally Episcopal/Anglican priests and deacons. The work has been challenging, for, as a colleague said, “We are building the plane while flying it,” but it is meaningful. Overall, Peter sums up the year with a comment he made to another priest while getting ready for the Easter vigil service: “I feel like I am living a dream that I did not know that I had.”

While Peter retired from Houston Baptist University at the end of May (it was true retirement in that none of the priests working in the Chancery of the Ordinariate are salaried but rather live from retirement funds and other sources of income), he still teaches a course per term for Houston Graduate School of Theology and he is still editor of the Word Biblical Commentary and still producing a steady flow of articles. He was also able to attend Evangelical Theological Society, Society of Biblical Literature, and Catholic Biblical Association meetings this year.

There were transitions in our lives. We sold our townhouse in May, moving to an apartment so we could be closer to the church. (Note the new address in the footer below – mail will not be forwarded past May.) We knew we wanted to do that, but the actual decision-to-move was suddenly orchestrated by God. It took just 6 weeks. We did not realize it, but in March, at the beginning of this process, Judy suffered a severe cardiac incident (the symptoms were that of a heart attack, but no blockage was ever found). At the time she did not visit a doctor. Instead, she did most of the packing and almost all the unpacking and oversaw most of the move.

If there was an upside to not visiting a doctor, it was that Judy did visit all of our children (and grandchildren) in Canada in the summer immediately following the unpacking, staying about a week per family, so briefer than in previous years. Each family has its challenges, but all are doing well. Peter broke away from work to get to New Brunswick, which allowed him to have a great time with the grandsons, settle some affairs there, and preach in the local parish.

In late August Judy did visit a doctor due to phlegm in her throat, with which she had struggled for two years. He ordered a chest x-ray to see if she had a lung problem. On Sep 4 we learned that her lungs looked fine, but her heart was enlarged. A referral to a cardiologist (and a battery of tests) indicated that her heart was ejecting less than half the blood it should each beat and part of it was not functioning. This led to a heart catheterization, the wearing of a “life vest” (wearable automatic defibrillator) for 3 weeks, and a lot of medications and cancellation of two trips. Between seeing the doctor when he put Judy on five different medications and the heart catheterization, there was significant healing of the heart function. The doctor thought that the medications wrought a miracle. Judy knows that it was the many many prayers being offered in her behalf that wrought this miracle of healing. Praise the Lord! Now she knows why she has little stamina and gets breathless easily. She has experienced enough improvement that her danger of sudden cardiac arrest is less likely, but she still is functioning at about half-steam, which is hard.

While Judy counseled/spiritual directed out of our house and apartment for the first 2/3 of the year (including some folk who “visited” via phone or Skype), in November she was approved as a pastoral counselor/spiritual director in the Ordinariate, so is now using the classroom next to Peter’s office two days per week. We have continued being involved in the Brothers and Sisters of Charity, Domestic expression, and in the summer Judy was appointed by John Michael and Viola Talbot leader of our cell group that meets at St. Clare Monastery in Houston.

The most exciting event in Judy’s life was the publication of the book that she has been working on for seven years. Pause Pray Play embodies her story of burnout and her work in burnout recovery and prevention for church leaders, starting in Schloss Mittersill and continuing through the development of the Pastors’ Sabbath Retreats. It is available on amazon.com, amazon.ca, and coachingsaints.com. Note that the author’s name on those sites is Judith L Davids, not Judy Davids.

While the physical “adventures” of the past year have left us very aware of our mortality, we still look forward to the future. If our Lord does not usher in his final return first, next year will be eventful none-the-less. In November the Ordinariate received the bound copies of its new Anglican use missal: Divine Worship: The Missal. At the same time we learned that (at the request of our Ordinary) a bishop had been appointed over the Ordinariate, Bishop-Elect Steven Lopes, who will be ordained on Feb 2, 2016. That means that Peter and Judy will have a new “boss” and that our life, which has always been exciting, will not remain static. Our Lord Jesus keeps life an adventure!

May our Lord bless you this Christmas with a sense of his presence and may He usher you into a blessed New Year.

John Michael and Viola Talbot, Gina and Dave Dickinson and Peter and Judy Davids at St. Clare Monastery the night Judy was installed as leader of the Cell Group.

I am a retired Director of Clergy Formation for the Personal Ordinariate of the Chair of St Peter, a retired professor, and an active Catholic priest (and former Episcopal priest for 34 years), writer, and editor. As a priest available to parishes in the Diocese of Austin, and the resident priest for the Austin Byzantine Catholic Community. I am also a husband, father, and grandfather. My main job at present is Chaplain to the Dominican Sisters of Mary Mother of the Eucharist in Our Lady of Guadalupe Priory in Georgetown, Texas
View all posts by Peter H. Davids →
This entry was posted in Personal. Bookmark the permalink.